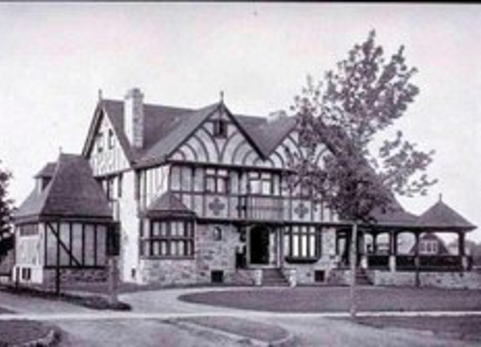 Tiger Inn, the third club to be founded at Princeton, began its existence in the University Cottage on University Place, which had recently been vacated by Cottage Club. The next year, it rented a clapboard house on William Street, where it stayed until 1895. In February 1895, Tiger Inn moved into a new building on the north side of Prospect Avenue, to the east of Ivy. Tiger Inn was designed by New York architect G. Howard Chamberlin, although Princeton myth credits Howard Crosby Butler, Class of 1892 (a founding member of Tiger Inn and Princeton's first professor of architectural history) with its design.

According to the Daily Princetonian, it was modeled on a 15th- century inn located in the Chelsea section of London. The first story was constructed from sandstone from the same quarry that furnished the stone for Nassau Hall. The second and third stories, which overhang the entrance, were executed in the half- timbered style that is characteristic of England's Tudor period.

The interiors continued the theme of the English inn throughout. The first floor contains a large stone fireplace (reputedly purchased from a manor house in Chester, England), extensive wood paneling, and a broad wooden staircase that leads to the library and other second-floor rooms. The dining room runs east- west across the back of the building. Mrs. T. Harrison Garrett, the widow of a Princeton trustee and mother of three of Princeton's most prominent graduates of the 1890s, helped to finance these interior decorations.

Tiger Inn is the oldest continually occupied club on Prospect Avenue, and it was the first club to build in an explicitly "English" style. Within two years, Ivy would build in the fashion of a different, considerably more formal English inn. Yet the Tudor style did not reappear on Prospect Avenue until 1920, when Terrace Club remodeled its Colonial Revival house into a half- timbered "Tudor."